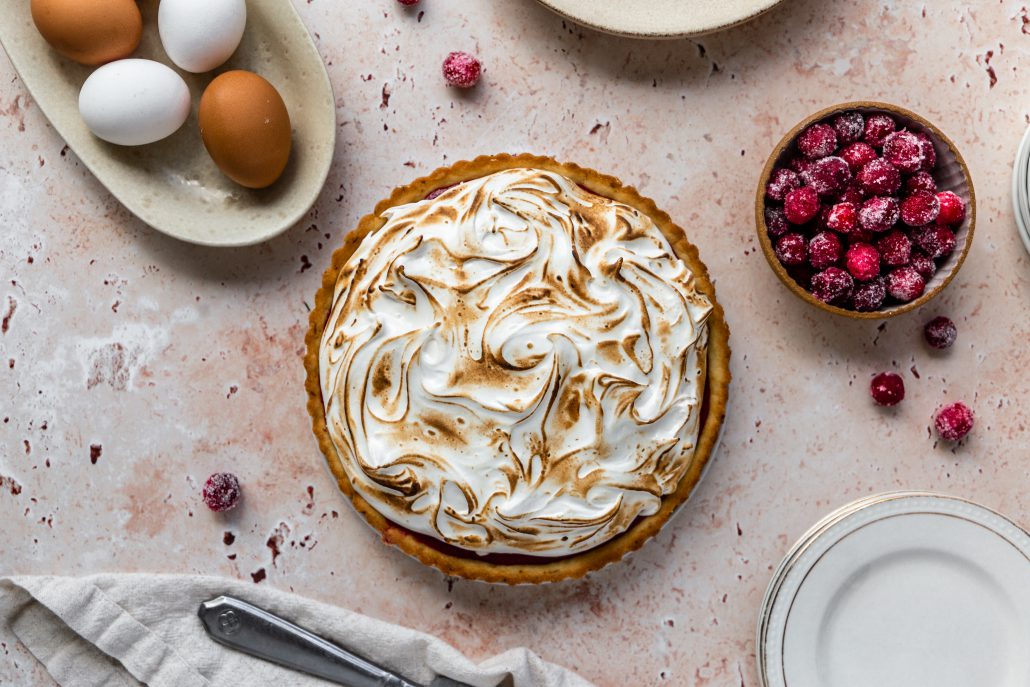 Gifts aren’t the only thing to bring to family get-togethers this season. This Cranberry Tart Pie is gorgeous, easy to make, and egg’ceptionally delicious.

1.) Preheat the oven to 400° F. In a medium sized bowl combine the butter and confectioners sugar and mix with a rubber spatula to combine evenly. Add in the orange zest and juice and mix again. Add in the flour and salt and mix until an even dough forms. It should not be sticky. Press the dough into an 8” tart pan that has a removable base.

2.) Poke holes all around the dough with a fork, then place it in the refrigerator to chill for 20 mins. Bake for 12 mins until the edges are golden brown and the middle is set.

3.) Meanwhile, make the cranberry curd. In a small pot, combine the cranberries, zest, and orange juice. Bring the mixture to a bowl, then to a simmer until the berries start to pop and release their juices, about 10 mins. Strain the mixture, pressing down as much as you can to save as much as the juice. Don’t forget to scrape the bottom of the strainer. You should have about 1 cup of strained cranberries when you are done.

4.) Separate the eggs, keeping the egg whites (do not discard!). Combine the egg yolks with the sugar in a small bowl and mix until combined.

5.) Add the strained cranberries, yolk mixture, and vanilla to a saucepan, and stir continuously on low-medium heat until the mixture has thickened, about 10 mins. Do not raise the heat to speed this up or else it will cook the eggs. The mixture is done when it has thickened and can coat the back of a spoon without trailing off.

6.) Add the cold diced butter into the saucepan, and stir until melted. Strain the mixture again, discarding the solids. Take the curd off the heat and cool for 10 mins.

8.) While the curd is baking, make the Swiss meringue. Heat an inch of water in a small pot and bring it to a simmer. In the bowl of a hand or stand mixer, add the egg whites and sugar. Place the bowl over the simmering pot (the bottom should not be touching the water) and whisk continuously until the egg whites are white and foamy and the sugar has dissolved, about 5-8 minutes.

9.) With the whip attachment, whip the egg whites on high speed, adding in the cream of tartar, salt, and vanilla as you go. Whip until stiff peaks form, about 8-10 minutes. They should be super white and glossy.

10.) When the tart has cooled, scoop the meringue on top and either torch with a kitchen torch or broil for 3-5 minutes, checking very carefully to make sure it doesn’t burn.